Will the Baby Look Like Me if I Use Donor Eggs?

Using Donor Eggs for IVF – Will the Baby Look Like Me? 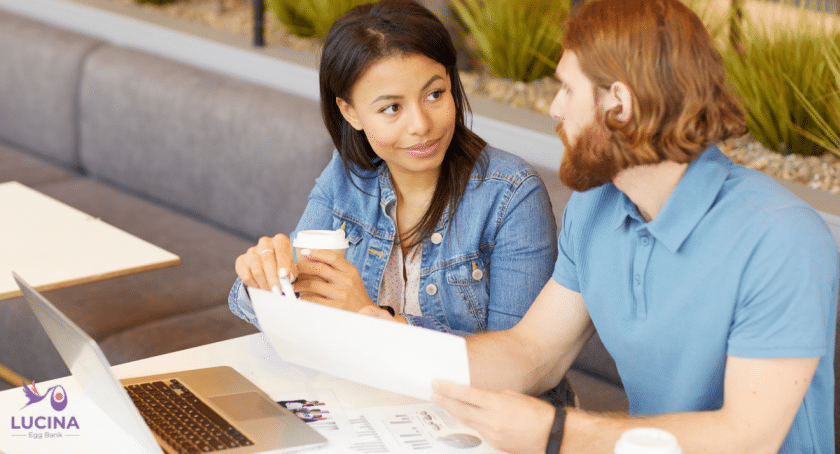 “Will the baby look like me If I use donor eggs?”

Almost all Intended Parents coming to us have asked this question and chances are you too landed on this article while looking for the same answer. Here is a quick answer for you:

There’s no guarantee that the baby will or will not look like the Intended Parents even if the Egg Donor greatly resembles the parents’ physical traits. The odds can only be raised that way and the baby’s prenatal development in your womb and its upbringing has a lot more impact than you probably thought.

It is the dream of every Intended Parent to have biologically related children, and that’s why a lot of women who use donor eggs for IVF may initially find it difficult to accept that they won’t be sharing a genetic connection with their baby.

Recent advances in reproductive science have offered great options for people dealing with all kinds of infertility problems. Surrogacy, IVF (in vitro fertilization), and other fertility procedures are being carried out to help Intended Parents build a family. Although it’s now easier for people with infertility to have children, there are some things Intended Parents need to know – especially the fact that while a baby conceived from donor eggs may not look exactly like the intended mother, the baby can definitely resemble the intended mother.

Genetics is a guessing game

Although it is possible to make some guessing based on the genetic parents’ features, no one can tell what traits a baby will possess before they are born. The same is true for biological children – rather than resembling either parent, a child may look exactly like one of the great grandparents.

DNA is the part of human cells that determines what characteristics a baby inherits from the parents. It is a group of genes that are transferred onto the child during conception. Each person’s DNA is made up of 46 chromosomes, half of which come from each parent.

If all the possible genetic combinations are considered, a couple can produce babies with up to 64 trillion different characteristics.

To complicate things a bit further, the majority of a child’s traits are the result of several genes acting together. Some characteristics are expressed only when a gene combination is increased, reduced, or mutated.

So, due to the complexity, scope, and variability of genetics, it’s not possible to know what a baby will look like before they arrive. Even though you chose a donor who looks so much like you, there’s still no assurance that the physical characteristics you wish your baby has will be expressed.

The genetics of the birth mother and donor egg

If you are wondering whether birth mothers have any effect on the growth and future health of their children conceived with donor eggs, the answer is YES!

Although the baby’s DNA comes from the Egg Donor (and the sperm provider in special cases), the recipient mother may still determine the baby’s personality in many ways, despite not sharing any genetic connection with the child.

Note that since a donor egg will not have the same genes as the intended mother, there is a high possibility that the baby will not look like the mother. But if the intended father’s sperm was used and traits like the intended mother’s were looked for in the Egg Donor, the child may resemble the father and probably the mother if the physical characteristics in the chosen donor are expressed in the baby.

Will I have a genetic connection to my child if I used a donor egg?

A lot of studies have indicated that the baby’s environment in the womb plays an important role in prenatal brain development, immune health, and childhood metabolism among other factors.

Although it is true that half of the child’s DNA will be from the Egg Donor when donor eggs are used in IVF, the answer is not that simple.

While the baby may not look like you physically, they may have the same facial expressions, humor, and mannerisms as you.

Genes are not the only thing that determines a child’s traits, talents, and interests. Environment and exposure also play an essential role during a child’s development. This means that you and the baby may share more similarities in the future aside from eye and hair color.

What the present science says on this topic

A study conducted by researchers at Stanford University and Fundación Instituto Valenciano de Infertilidad in Spain found that women who conceived with a donor egg do transfer some genetic material to the child during pregnancy.

The gestational mother’s endometrial fluid, which envelops the growing baby in the uterus, contains some genetic material known as “microRNAs.” These molecules are taken up by the developing embryo and can impact the expression of the child’s DNA.

In short, microRNAs can influence which of the baby’s genes are switched on or muted, determining which characteristics will appear in the baby.

Studies are still exploring how this works, and the degree of influence a genetic carrier’s DNA has on the child she carries. However, early evidence indicates that you may have a more significant genetic and biological connection to your donor egg baby than it was initially believed possible.

The importance of the prenatal window

The prenatal window (the time the baby spends in the womb) is one of the most important times during human development. Other crucial times are the preconception period and the postnatal period, as they play a key role in the baby’s health.

The womb has been seen as just an oven in the past. Although we have long known that the uterus supplies nutrients and oxygen to the child, researchers just began to explore how vital the uterine environment is in fetal development.

Recent studies in humans and animals have suggested that the maternal environment has a significant impact on the baby’s brain development, immune system, metabolism, and a lot more.

What if the eggs are from relatives?

One common practice among women who require egg donation is getting the eggs from one of their biological family members.

Although the reasons to use a relative’s eggs differ and are not just because of physical appearance, one main reason is to make sure the baby conceived with donor egg has a certain part of DNA as the recipient mother.

However, there is no 100% guarantee that the baby will look like you because even genetically related siblings may look different from each other. Even in the absence of fertility challenges and medical interventions, some physical characteristics may not be expressed in a generation.

So, the correct answer to your question “will my baby look like me if I use donor eggs” is that they may, but this is not guaranteed. In fact, even if the Egg Donor searches are not based on specific criteria, there’s still no guarantee that the donor egg baby will not resemble you.

You might also be wondering, “how is it possible that my donor egg baby will look like me?”

Recent studies in the fertility field have shown that even though the donor egg does not have the same genetic material as the recipient, the mother has a great influence on the baby’s genes between conception and delivery.

This is due to the embryonic fluid that surrounds the baby while in the womb and the influence of microRNAs as we have discussed.

Will you regret using eggs from a donor (Answer: No, of course)

It’s common to start having doubts once you have decided to go ahead with a frozen donor egg cycle. If this is the case with you, note that you are not the only person to feel this way.

As a matter of fact, Intended Parents going through a donor egg cycle have the same fears and “what ifs,” such as:

No matter whether you are experiencing one or all of these fears, the mental stress can be real and that’s why it’s best to stay in contact with a counselor.

Increasing the odds of resemblance

At times, even “naturally conceived” babies don’t resemble their biological parents. If you and your spouse both have alluring blue eyes and black hair, there is no guarantee that – if you conceived spontaneously – you won’t wind up with a baby with dark green eyes and blond hair.

The fact is, there’s more resemblance between children and their non-genetic parents than it may appear. The possible explanations for this are:

If you require an egg donation to conceive, you will be the real mother of the baby because you will carry them in your womb and nourish the child from your blood, thoughts, and emotions your entire life.

Who are the baby’s real parents, eventually?

As a parent of a donor egg baby, you should not focus much on physical resemblance because your baby will take after you in many other ways: it will resemble you with facial expressions, behavior, gestures, habits, education, and other things you’ll teach him or her when growing up. All these cannot be inherited, so genetics is not a factor here.

Since some hopeful parents require the assistance of sperm and/or Egg donors to become pregnant, the resulting baby will share a genetic connection with one or none of the parents. But note that the use of donor eggs or sperm does not make any difference when it comes to family bonds.

Adoption has shown that a baby’s “true” parents are the people who tell them stories at bedtime, apply bandages to their cuts, embrace them, and attend their school games. And surrogacy and other “nontraditional” family-building options are not different in this regard.

Note this: no matter whether a baby is genetically related to the parents or they were delivered by a Surrogate, the real parents are those that raise and like them so dearly. Although genes offer the roadmap for your child, they have no influence on the kind of person the baby will grow to become. Your beliefs, love, and the kind of nurturing you give your child will have the most significant impact on the type of person he or she will be.

Bear in mind that it’s you and your partner who have welcomed a new baby into the world. You strived for it. The child is yours, no matter the genes or physical appearance.

If you still have questions, simply ask us in the live chat or dial the number.

if you are looking for an Egg Donor who would resemble you or your spouse, the best place to start is our egg donor database.

Read Our Articles to Make the Journey Easier View All The journey to parenthood can be difficult and emotionally tasking… Becoming Parents via Egg Donation – What You need to Know

Infertility is a serious medical condition that can affect anyone,…

What are my overall chances of becoming pregnant using frozen…

Find an Egg Donor Who Fits Your Preferences